This sums up my life: 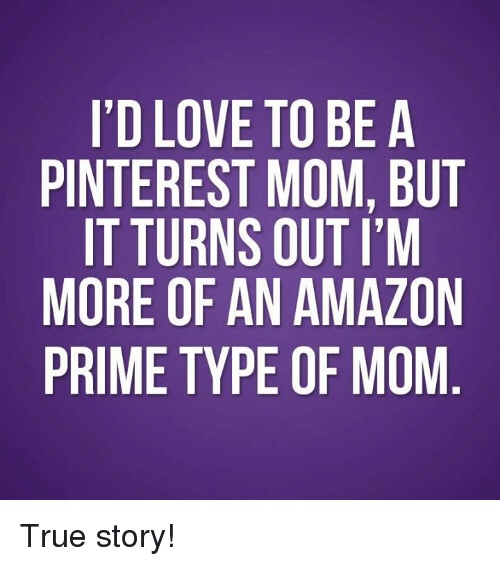 I hate to bake. I hate crafts. Basically, I hate any activity that involves closely following directions. When Mike and I first moved in together, he was amazed at my inability to put together IKEA furniture.

Fast forward thirteen years. We have an incredible eight-year-old boy, one we intentionally tried to have in February to time my maternity leave, allowing me to stay home for seven months.  Each February since, we curse ourselves as we try to plan his birthday party. We usually have his party at various indoor facilities throughout the state. Last year his party was at McCoy Stadium. While his parties have always been fun, Liam wanted an outdoor party so we didn’t have to worry about time or how many kids he could invite. We decided to celebrate his eight and a half birthday over the summer. When he asked if he could have a Harry Potter themes party, I jumped at the chance to let him have a party in a theme I really liked (as opposed to last year’s love of Minecraft). Liam and I have been reading the illustrated books together. I love that he loves them. (I’ve stated earlier that I sometimes feel guilty for not sharing his enthusiasm for things he loves, such as Star Wars, Minecraft, and Pokemon.)

I told him that this would only work if he helped me, which he happily obliged. We set off on Pinterest. He started off having much more faith in our abilities that I even had, wanting to make Hogwarts letters to send out to friends.

“We can put wax on them and send them to everyone.”

Liam really wanted to give his friends wands. We had recently visited Wynotts Wands in Salem, where Liam chose his wand. He understood that we could not afford to buy each kid a wand. The bulk ones online were either too cheap or too expensive.  Pinterest shared a tutorial for making wands that actually seemed reasonable. We ordered chopsticks, hot glue gunned the ends, then painted them. Liam was happy to help, and the finished products were pretty cool!

We also made golden snitches and chocolate frogs. Liam began asking me to make the chocolate frogs on Monday. Knowing I could not be trusted with that much chocolate in the house, we needed to wait until Friday. 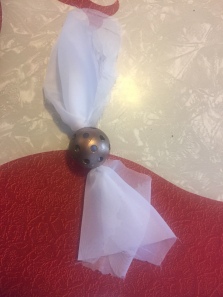 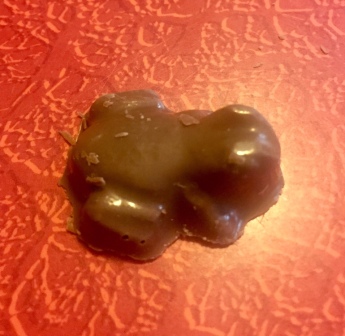 We made a Quidditch court. Mike was happy to act as our Quidditch coach. The kids had a ball playing.

I set up a table for “potion class” containing small cauldrons of baking soda and vinegar. They were about to mix the ingredients in their cauldrons and watch the reaction. Liam used to love doing this trick, but I feared that they would think it was silly or childish. Potion class was a hit!

After potion class was wand class, in which the students needed to keep their balloons in the air.

My only real goof-up involved the cake. I assumed I could order a cake from Stop and Shop a week before the party. I was wrong; they no longer carry the cake kit. Walmart does not have Harry Potter cakes, either. After Googling “easy Harry Potter cakes” for a while, I decided to order cupcakes from Stop and Shop and cake decorations from Amazon. It worked out just fine. 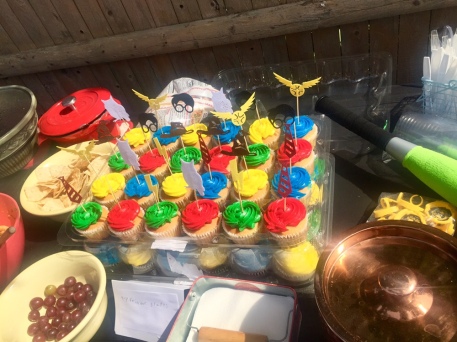 After a week of making golden snitches, wands, and Quidditch courts, Mike began calling me his “Pinterest Princess.” While I don’t see myself doing this again, the process wasn’t terrible. I love Liam’s ownership in the planning. I didn’t mind doing the projects with him. I’m also painfully aware that the number of years remaining of planning birthday parties and Liam wanting to spend all of his time with Mike and I are dwindling. I need to make the most of it while I can.

Guys! I did something horribly amazing- I gained ten pounds in a very short amount of time. It happened so quickly that I didn’t even realize it until I was back to my “Oh no” weight. (Does anyone else have a hierarchy of weights? (Mine are happy, okay, watch it, oh no- do something)

After finishing the half, I continued to eat as though I was still running twenty miles a week. Liam decided he did not want to continue with Laid-Back Fitness. (Nothing happened, he just wanted a break.) Without Liam’s parent discount and the time for me to workout while he is in class, it didn’t make sense for me to continue. I hurt my calf doing speedwork and couldn’t run for over two weeks. It got ridiculously hot. Then we went on vacation for a week, following the mantra “do what you want” for eight days.

I was up five pounds the day we went away. When we returned, I was up ten. That is what eight days of eating cinnamon rolls and bacon for breakfast will do. I am not a huge drinker, sometimes going weeks without even having a single adult beverage. While on vacation, Mike and I drank beer each night while sitting outside, listening to the waves, watching the stars, and chatting away. With beer came cheese and crackers and, before we knew it, we were indulging in a day’s worth of calories after Liam went to sleep.

When I returned home, I fearfully crept on the scale, learning I was up five pounds in eight days. Time to get back on track! This week marks the official start to training for my second half marathon. Now that I know I can run thirteen miles, I want to focus on getting stronger and faster.

I’ve worked too hard to only come this far. It’s time to hit the reset button and get back on track.

T-minus three hours until the second cast is removed!
First grade vs sixth grade. Time is going by way too quickly!
New cast, who dis? Making progress!
One week post surgery is complete, but I have many more months to go https://worldsokayestrunner.blog/2021/08/31/week-one-reflections/
Since we cannot be in Vermont, we bring the Lake Monsters to us! @vermontlakemonsters #lakemonsters #fcblchampionship
Heck yeah they are! @vermontlakemonsters