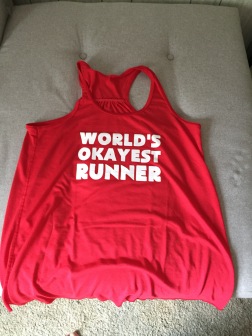 The idea of writing again has been dancing in my head for months.  When my son was born, I started a blog focusing on the transition into motherhood.  As the years went by, my focus has shifted to becoming my best version of myself, raising my son to be a compassionate, intelligent human, and pushing us to grow by stepping outside of our comfort zones.

My entire life, I’ve struggled with my weight, gaining and losing the same ten pounds over and over.  I’ve tried several times to run, never really getting beyond “okay” at it and never really being able to run more than a block.  This spring, I decided to join a beginning runners group.  This forced me to publicly try something new and meet new people, two of my biggest struggles.  Three months later, I ran my first 5K, meeting my goal time.  Since then, I’ve continued to run and work out.

I usually keep my private life private, but this is too important to keep to myself as I have too many people close to me fighting a terrible disease. Last March, a lump was found in my breast. Even though it lit up on an MRI, my doctor assured me I had a “best worst case scenario” as it was small and away from my lymph nodes. Thankfully, a biopsy showed it to be benign, but I will be receiving both a mammogram and MRI annually. I was beyond happy to receive this report in the mail today. Make sure you schedule your mammograms and exams. It’s much too important to put off.
When you want to stretch and practice yoga, but your dog missed you so much! #lablife @littlerhodyrescue
Notifying B.A.A. that I was unable to volunteer was hard. Luckily, I found another way to help others today!
Today is such a bittersweet day. So excited for all of my friends who completed the Virtual Boston Marathon today while trying not to throw a full-blown pity party for myself. I’ve been fighting injuries for over a year now. I’ve only attended one November Project workout this year. I’m seven weeks post surgery and just starting to weight on my foot. So I’m sharing my biggest celebratory moment of the week. After days of trying, I was beyond excited to do this Tuesday and cannot do it today. I need to remember that progress is progress. I won’t be able to even think about running until February, but I’ve already decided that I am going to complete this Boston Marathon goal solo next year! Congratulations to all of my friend who accomplished their goals today!
First round of PT at home today. It felt good to start moving a bit. The muscle is returning, but the atrophy is still there. Excited for the process of getting back out there!
Recovering from surgery requires patience and perspective. I’m hoping getting outside will help with the mental struggles of an eight-week recovery. https://worldsokayestrunner.blog/2021/09/30/week-five-reflections/