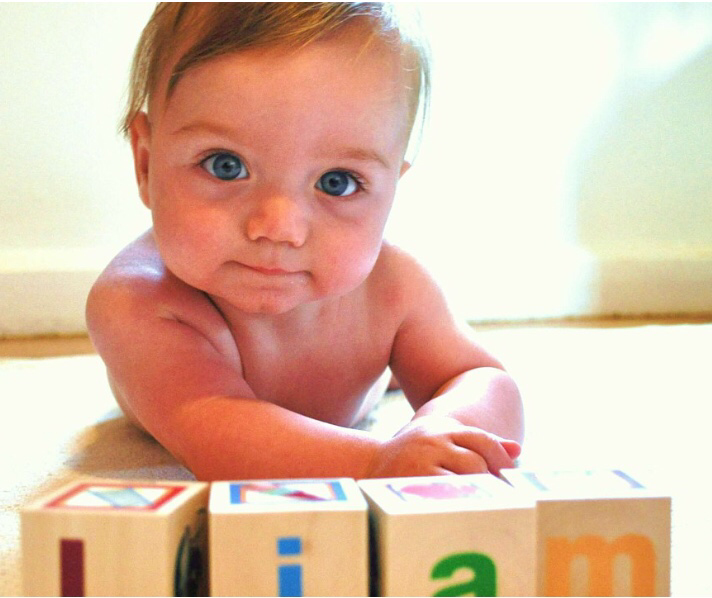 When I found out I was pregnant, Mike and I immediately pondered names.  My choices were Madalyn or Reagan for a girl and Holden for a boy.  Mike vetoed Holden on the spot. We went to our twenty-week ultrasound not knowing names.  While I did not want to find out the gender of our baby, Mike did.  He now admits that he spent weeks looking at ultrasounds on Google Images to know how to see the gender.  During the last few pictures, Mike looked over the ultrasound technician’s shoulder, hoping for a glimpse of anything that would determine the gender.  His face lit up when he realized he saw what was unmistakably a boy.  Once I knew, I was glad to know that we were having a boy.

We still needed to name said baby.  We were toying with the idea of naming him Michael after Mike and his father but calling him by his middle name.  One night, Mike came upstairs all excited.  He suggested naming the baby Michael William and calling him Liam for short.  He’d be named after my father-in-law, one of the noblest men I’ve ever met.  I loved the idea!  We also decided not to tell anyone the full name, explaining that we would go with the name Liam.  “It will be different,” Mike had said, “There won’t be three of them in his class.”  The world was in the height of Aiden mania.  There were millions of baby boys named Aiden or names that rhyme with Aiden (Jaiden, Brayden, etc).   It was settled; we had finally named the baby!

Little did we know that millions of other parents were having the same conversation.  Liam ranked in the top three names for the next few years.

After months of waiting, we finally met our Liam.  When he was in his Grumpa’s arms, we let Mike’s dad know that he was holding his namesake.  It was one of my favorite moments of my life.

Fast forward six years.  Michael is finished at his daycare center and moving to a new school for first grade.  At an open house, he told us he’d like to be called Michael.  It seemed easy enough.  It is still a struggle to remember when to call him Liam and when to call him Michael.  I’ve been chitchatting with someone about Liam and asked if I have another son.  His birthday party was a fun mix of friends from home, his old school, and his new school.  Singing Happy Birthday sounded like a garbled mess during the last line.

Liam has always had a way of using logic to get what he wants and to get the last word.  Often, I’ve wished he’d just throw a tantrum so I could veto him and move on.  As I was preparing Liam for a week of summer camp, I labeled all of his materials “Michael.”

On the first day of camp, Liam came home proudly wearing a nature hat he made at camp.  Across the rim read “Mike.”

He shrugged, “I told them they could call me Mike.”

As he makes friends at his new school, he is slowly being called Mike and sometimes the dreaded Mikey.  We specifically didn’t want a Mikey!

Our seemingly simple plan to name our child is more confusing than ever.  He goes by three different names.  I tend to use Liam most of the time and reserve Michael for when he really needs to listen and pay attention.  Mike and I also have a handful of nicknames that we mix in as well.  My favorites being Booba and Kidface while Mike calls him Sport and Sport Puppy.

Even though I often complain to Mike that I wish we had just named him Liam or just called him Michael, I sometimes love having this name confusion.  When one of the most confusing things in life is what people call your kid, I guess things are pretty drama free.