I made a promise to myself that I would not weigh myself during April. #noweightilmay has proved easier than I imagined. To be honest, I looked myself up and down and felt my tummy for a few days to gauge how my body felt and looked.  I can tell by merely putting my hands on my hips whether or not I am bloated that day. Anyone who knows me knows that I hate surprises and need to know what is going on. While not seeming the number has been nice, it is difficult to relinquish that control that accompanies the scale.

I paid into the second round of Biggest Loser with my coworkers. We were supposed to weigh in each Monday. I skipped last week but was curious, more because I didn’t want to give up my chance at the monetary prize than for the number on the scale. Without getting on the scale, I had managed to stay the same weight for almost two weeks. Yes, I would be happy if it had gone down a few pounds, but I was pleased that I did not gain weight when I was not holding myself accountable with daily weigh-ins.

Hoping that I would be down a little, I went to the weigh-in. The scale said I was up a half pound. Whatever. I had a realization about this contest: I was not going to win. We are on vacation next week and won’t weigh in. The following Monday, I will weigh in after spending three days in New York City. We don’t get down there very often. Therefore, it would be a crime not to eat my weight (whatever that number is right now) in black and white cookies and whatever other treats I encounter. When I go away, I prefer to eat like I had been just voted off the reality show Survivor.

The kind lady who supervises the weigh-ins tried to give me friendly advice: “Just watch your portions and go for walks.”

“I ran ten miles on Saturday.”

I know her intentions we well intended. I truly believe that. If I have learned anything through my adult life, it is this: my body does not believe in being anything below a size ten. For the six months leading up to my wedding, I watched every calorie, attended back to back workout classes, ran miles and miles, and never made it below 155 pounds. (This was also before my hypothyroidism was discovered, but the weight doesn’t move below 160, even when my thyroid is in check.) 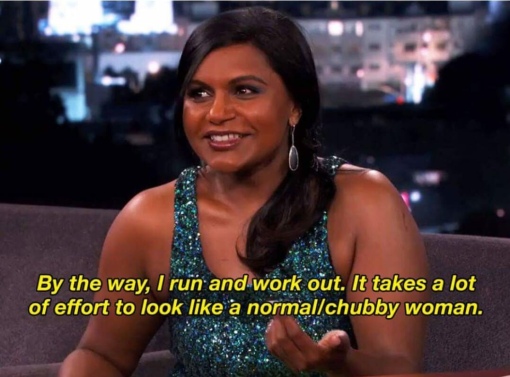 I work out a lot and eat a pretty good diet. It could always be better, but most people could say the same thing about themselves. I drink plenty of water. It has taken me a long time to accept the fact that I will never be tiny.

During this round of Biggest Loser, I have run my fastest mile. I have run my longest runs: ten plus milers. I PRed my deadlift: 210 pounds!

My obsession with my weight gives me a weird ability to remember what I weigh at any picture I see of myself. I keep an album on my phone illustrating gains and loses.  As I get stronger, the number might not go down.  Sometimes, It might go up. I need to remind myself that as I continue this journey.

The final weigh-in of Biggest Loser is the day after the half, May 7. I may jump on the scale to see if my final weight qualifies me for a prize. Or I may finish the race, go for a beer with my friends, celebrate that we worked together to reach a fantastic goal, and not worry about what the scale says on Monday morning!