John Green wrote this line to describe how a character falls asleep.  It came to my mind yesterday while watching Liam.  He seemed to grow a few years in the course of a day.

We saw our first snow this weekend.  Getting Liam ready to play in the snow is usually a huge pain the neck.  Yesterday, he got himself dressed completely on his own.  He needed help with his boots, which he managed to outgrow in record time.  He was able to borrow a pair of mine.  Once we were outside, he began helping us shovel rather than playing. Watching his clear the driveway, it seemed like just yesterday that he was barely able to make his way over the pavement while he tried to clear off his Cozy Coupe. 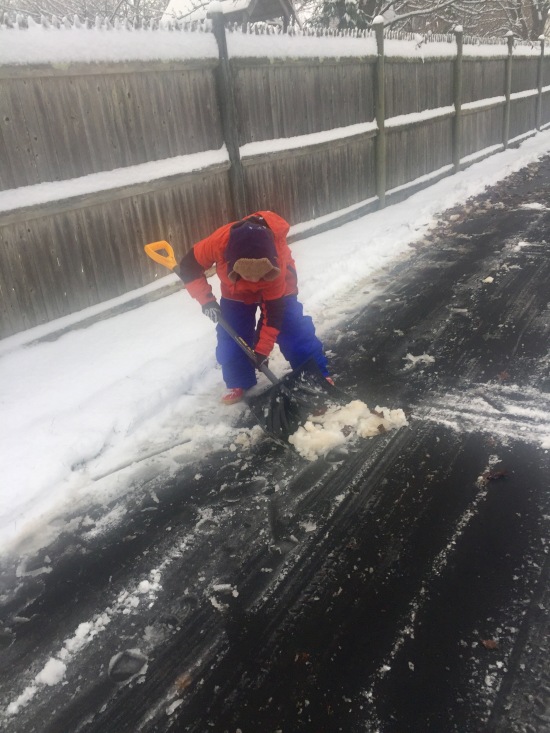 It was a big day for Liam because he finally moved out of his five-point booster.  He made it to almost eight before he moved to a booster that uses the car’s seatbelt.  I am fanatical about car seats; Liam has always been in the safest car seat we can afford.  He stayed in his five-point booster longer than most of his friends, a source of much whining in our car.  He was very happy to make the transition out of his “baby seat.”

While Mike watched the Eagles game, Liam and I wrapped gifts.  While I was asking him to write out his gift tags, he also insisted on wrapping his own gifts, refusing to even let me hold down edges of wrapping paper.

Every day, I watch Liam grow a little bit.  He asked me if we can listen to the “news” in the car. (Yup, my seven-year-old prefers NPR.) He starts conversations asking to discuss preferences of Elvis over the Beatles.  “Elvis is the king for a reason.”  Yesterday, he asked why people need to pay a lot of money for medicine.  “Why should we have to pay for Tylenol?  Does the government want people to die?  Isn’t it easier to just give people Tylenol when they are in pain? What about kids who are sick?  What if their parents can’t afford medicine?  You always tell me I am lucky because we have the money for the things we need.  What about the kids whose parents don’t have money?”  (“Dude, you just perfectly summed up one of the biggest debates in American politics right now.”)  I know he is constantly evolving, but yesterday hit me in all the feels.  He is turning into a young man.  My baby is still in there, but gets deeper and deeper down.  As I tucked him in last night, he wore his Ninja Turtle PJs, hugged his beloved stuffed bunny, and gave me nose rub kisses, I was happy that glimpses of the little boy remain.  I can’t wait to see the man this boy grows up to be.

One thought on “Slowly, and Then All at Once”